November 28, 2007
Guam was like a family reunion for me.. i have loads of cousins and little newphews and nieces who live in guam.. I also have a very good japanese dive instructor who happens to own Papalagi dive shop in guam and a chain of dive shops in tokyo (he was in tokyo when we were in guam.) Anyways the trip was special because of family. Il post family pictures as soon as i get copies.

The metro pacific group (producers of the show) treated us like family too!! It was cute to see the group which is composed of married men, be the leaders of the whole project. The wives really supported thier husbands. Truly, the show was a sucess because there was a flow of authority and unity within the group.

Here are some pictures.. 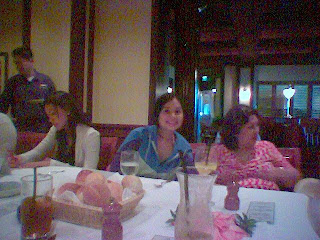 Lunch at the Marriot with Sitti, Kitchie and Mrs. Margie Nadal Kitchie's mommy :) 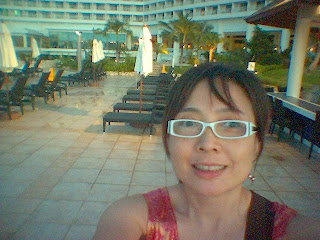 We stayed at the Sheraton Resort Hotel! It was great! The food was super yummy and the place was so nice and clean.. we thank the metro pacific guys and wives for taking care of us.

Our gig with Sittie Navarro was a unique exprience.. just mixing Bossa and Pop-rock was a feat. imagine the crowd when Sitti was playing and then Kitchie.. its was different because 1. there was no violent reaction from the crowd. 2. the crowd enjoyed both experiences from the oldies to the kiddies.. it was a "global like" affair in terms of music clashes. 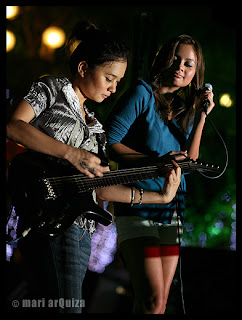 Im looking forward to more posting of pictures.. during the show. Im just waiting for the copies. :) i post it when i have it!

so nice to have met you here in guam. hope you guys can come back soon.

ali said…
excuse me po,
im Ali..ahm,i wrote 3 songs,yun 1 dun gusto ko po sana makanta ni ms.Kitchee.im a fan of her..sana po pansinin nyo to,just want to fullfill my life..just want to her my composition on air thru my Idol.pls send me instruction how to send my songs to her.
godbless & thank you,
ALi.09108014428
2:09 AM

Popular posts from this blog

It takes Faith to ENJOY

December 11, 2006
To all fellow workaholics and small spenders this entry is for you! I am about to embark on a journey to the unknown.. I am going on Vacation! Yes! I dont really go on vacations.. most of my trips are family organized, school activities, and of course work related! Meaning i dont really spend for it. These free vacations end up being fun but i guess it starts off as an obligation.. My travel starts off with a gig in the following places: 1. Hong Kong on December 16-18. Kitchie Nadal was booked to sing for Globe Telecom along with True Faith and Cesar Montano. 2. Leaving for Singapore Dec 18. I have 2 hours to arrive and get my new luggage for Singapore. 3. Dec 19 we play in Singapore for our Every Nation Church in 12 Riffles Bldg. This gig is fun because it will be our first time to perform with our Singaporean family. 4. Dec 20 fly to India Amistrar.. here comes my faith to enjoy.. As i have mentioned i go to organized paid by others vacation.. from December 20 2006 -January 8, 2
8 comments
Read more

December 02, 2007
Law of Attraction- There are many who are starting to get attracted to the Law of Attraction. With the top rating multi-million sales of the Secret and the many Self- help seminars like the Landmark Forum. I want to share my experience regarding this. Here's a quote from... Abraham: You did not come into this environment to create through action. Instead, your action is meant to be a way in which you enjoy what you have created through thought. Esther Hicks Source: The Law of Attraction: The Basics Of The Teachings For as he thinks in his heart, so is he..proverbs 23:7 Ever since I remember I have always wanted a perfect life and I strive for perfection. I looked inside me and tried to change my heart from within.. I even attended self-help seminars and bought so many books. But my longing was deep.. so deep that people, knowledge and philosophies, etc cannot fill.. So I got outside help to fill the gap.. relationships, alcohol and even drugs to dull the deep need for signi
6 comments
Read more

roca
from artist manager to school administrator.. from skill to skill the journey is as important as the destination